Christie Quinn is a Class A Member of The LPGA T&CP Division. Growing up as an army brat, Christie lived all over the U.S. and Europe settling in Ponte Vedra Beach, Florida, where she finished high school and became interested in golf, with TPC at Sawgrass and LPGA just down the road. Being self motivated, Christie worked through high school and college in retail, ergo little time for golf.

Christie’s post college career was also retail, which put me on a fast track moving to New Orleans, Baltimore, Boston and finally San Francisco. Being an executive from 2000, Christie had a blast playing in many charity and Pro-am tournaments until 2005. The passion for golf took, Christie was hooked. She wanted to be the longest driver and the shot we used at every company scramble. Christie’s competitiveness in my profession was now revealing itself in my golf game. She wanted to play and compete at a higher level and my career was taking up too much time My company was kind enough to allow a 6 month discover-another-field-leave of absence. Being a visual learner, I watched many hours of the golf channel and other duffers out at the range to develop an smooth push-draw swing. It was a go-to swing under pressure and repeatable. So in March of 2006, I settled into a country club and started practicing and playing competitively on mini-tours, USGA events, and club tournaments as an amateur. I am a firm believer in commitment and positive attitude to accomplish goals.

With the help of swing coach-Tim Burr, head golf pro out at Blackhawk CC, a massage-therapist/physical trainer-Paul Behne, chiropractor, Jess Pontious, a Canadian Caddie-Gregg Cox, and a life coach I was able to pass my PGA & LPGA Players Ability Test. Having worked from an early age, I am a firm believer in commitment and positive attitude to accomplish goals and look forward to helping you with yours. 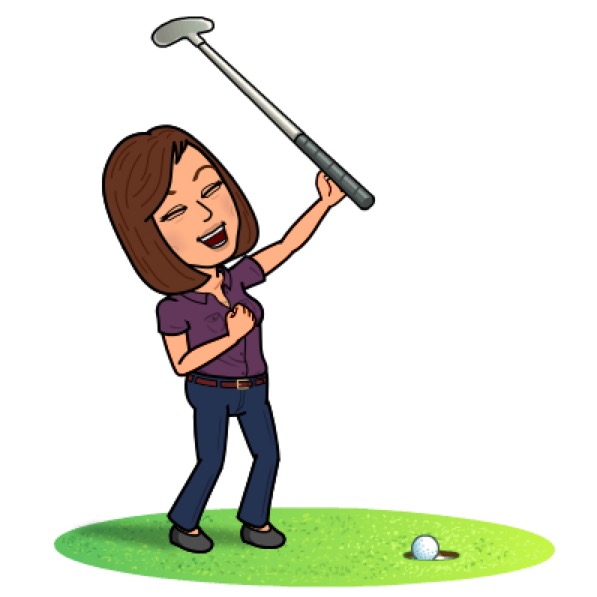 The spirit of golf, the passion for striking the ball, & hearing friends say “Nice shot” are all apart of a duffer’s life. The inner struggle with improvement is a life long feat, yet it can be discovered that living and accepting the body you have is the secret to enjoying golf.

Discover Your Swing!® is my trademarked brand that coins my niche for teaching. This niche is a philosophy to assist every golfer to find and embrace their unique swing. Life is full of variables, one person’s level of strength and flexibility is not like another’s; ergo each swing is a personal thumbprint. Once this is understood, a golfer can learn to accept the body they have presently, and/or be motivated to transform towards achieving possible goals.

Whether you’re self-taught or well trained golfer, Discover Your Swing!® is a philosophy defined as a series of transformations for anyone. I would like to help students of all levels access the body they have, know and understand it’s ranges of motion, and decide if or how we can develop a plan to transform. I have found much success in discovering with students their own personal acceptance in what their body can be. It seems like many students are grateful for bringing this awareness to the forefront of their consciousness, and sometimes this is the most fulfilling lesson I can give. I do this by taking them through a physical assessment during the interview process. See doc-What we CAN do!

Once we achieve this, many students enjoy golf, because they understand why miss-hits happen and the direct relation of the body to the golf swing. If the student wishes to transform, then I provide a partnership-guided lesson plan called Discovery! which includes the mental, physical and emotional components to build a realistic regimen with a “discover line”, as opposed to a dead-line. This is documented and built on a takeaway of a simple plan See doc-Discovery! This is the way I have learned, to play my best golf, being physically challenged and starting so late in life. I believe that by utilizing the experience of a professional that has accomplished these transformations, students will begin the path to Discover Your Swing!® The transformations are understanding-What we CAN do! and/or transforming with Discovery!